When I saw in a fancy French Magazine: Whoopie Pie, les nouveaux cupcakes. I was quite upset. What are those Whoopie Pies that I haven’t yet heard about? Then I saw them in a pastry store, and decided to do a bit of research. Originating from the Amish community, those “Whoopie Pies” were commercialized (cheaply) several years ago under the name Wagon Wheels.

Here it is, republished on the web by House and Home: Chocolate Whoopie Pies Recipe

This version has been upgraded from the classic by using canola oil instead of grease (!), making an Italian-like-meringue for filling and adding coffee to give a modern and subtle taste to the dessert.

Here are more simple recipes for the Whoopie Pie, closer to the classic one with mashmallow fluff filling. You can even read up on the history of this dessert: New England Whoopie Pies – Amish Whoopie Pies – Gob History

Seeing CakeMail guys having Whoopie Pies for breakfast is quite impressive. Those hamburger-sized soft cookies filled with a cup of white fluffy-filling are gigantic, but seemed easy to eat 😉

Team Comments:
If there was such such a thing as a winter ice-cream sandwich, this would be it.
It taste very good. But it’s BIG!
I’ve apparently picked the WORST day to get sick… (a team member at home…)

My verdict:
Will Whoopie Pies replace cupcakes? No! You cannot make as many variations in flavours and decorations. They are good and fun for a picnic or in front of a movie but I would not bring those to a fancy event! They also take a long time to make, especially in large quantities. They say in the recipe to use an ice cream scoop to measure the quantity of dough for the cookie but since it makes hamburger-size cookies, I would do them much smaller.

Isabel Lapointe is CakeMail’s Cherry In Chief (and our resident baking expert!). Follow her on twitter at @CherryInChief. 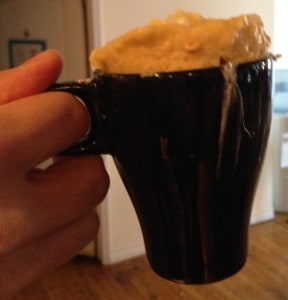 What happens when you’re done?

Are you in Marketing?